Why Do Koalas Hug Trees - Uncovered

Why Do Koalas Hug Trees - Uncovered


Using thermal cameras, researchers in Australia uncovered the science behind a habit that seems, well, cute: Koala bears hug trees to cool themselves. It turns out that tree trunks can be up to 12 degrees cooler than the air, and with Australia's recent hot spells rising well above 100 degrees, koalas get extra huggy. 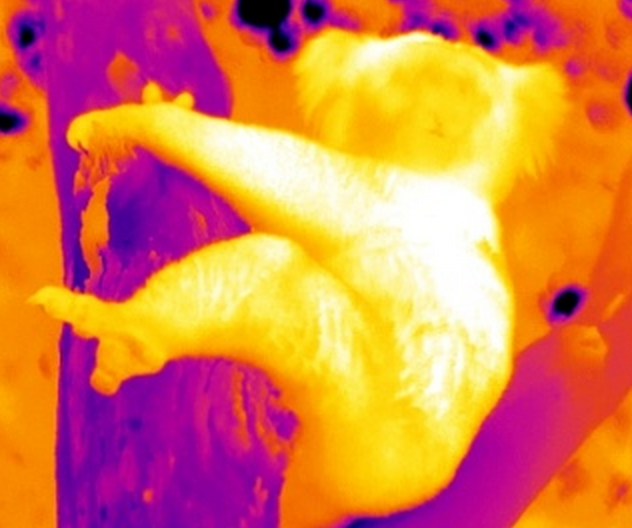 Conversely, in the cold of winter, the marsupials tend to climb higher into trees, closer to the leaves they eat. The scientists came to their conclusion after using thermal cameras on a particularly hot day.

"If we had thermal vision, it would have been an obvious thing," a University of Melbourne researcher tells the BBC. "You could see the koala sitting on the coolest part of the tree trunk with its bottom wedged right into the coolest spot." And in doing so, koalas manage to conserve a substantial amount of water: They typically cool themselves by panting, LiveScience explains, with heat escaping their bodies by way of the moisture leaving their mouths.

Modeling showed tree hugging halved the amount of water that would otherwise be lost. The study also explains why the marsupials have been spotted in acacia trees, which aren't a food source: Those trunks get cooler than eucalyptus trunks, notes Australian Geographic.

As for why the trees in general are cooler, researchers say it's possibly because they pull in nearby groundwater, whose temperature doesn't fluctuate as much as air temps do.

(Earlier this year, Australia's heat caused thousands of dead bats to fall from the sky.)

Other Articles Of Interest:
Why Do Koalas Hug Trees?
Young Illegal Immigrants Can Defer Deportation
Illegal Immigrants Are Being Shipped To Arizona
Why Are Mega-Mergaers Killing Innovation?
D-Day Invasion
Rihanna's Racy Dress - Is It To Much Or Not Enough?
Don & Soot Zimmer Love Story - The Special Woman