The history of Chicago, Illinois, has played an important role in the history of the United States. Americans founded the city in 1833. The Chicago area's recorded history begins with the arrival of French explorers, missionaries and fur traders in the late 17th century. 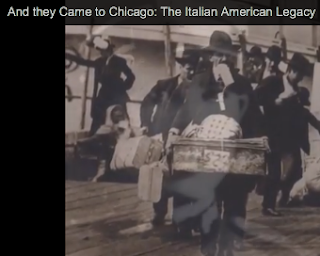 The territory was claimed by the United States in the late 18th century, at which time the area was inhabited by the Potawatomi Indians. The city was founded in the 1830s and grew rapidly from real estate speculation and the realization that it had a commanding position in the emerging inland transportation network, controlling access from the Great Lakes into the Mississippi River basin.

Despite a fire in 1871 that destroyed the central business district, the city grew exponentially, becoming the nation's rail center and a major center of manufacturing, commerce, finance and (after 1890) high culture.

At its first appearance in records by explorers, the Chicago area was inhabited by a number of Algonquian peoples, including the Mascouten and Miami. They were closely connected through trade and seasonal hunting migrations to their neighbors, the Potawatomi to the east, Fox to the north, and the Illinois to the southwest.

In 1671, Potawatomi guides first took the French trader Nicolas Perrot to the Miami villages near the site of present-day Chicago.

Chicago's location at a short canoe portage (the Chicago Portage) connecting the Great Lakes with the Mississippi River system attracted the attention of many French explorers, notably Louis Jolliet and Jacques Marquette in 1673.

The Jesuit Relations indicate that by this time, the Iroquois tribes of New York had driven the Algonquian tribes entirely out of Lower Michigan and as far as this portage, during the later Beaver Wars.

The Algonquian tribes began to retake the lost territory in the ensuing decades, and in 1701 the Iroquois formally abandoned their claim to their "hunting grounds" as far as the portage to England in the Nanfan Treaty, which was finally ratified in 1726. This was largely a political manouevre of little practicality, as the English then had no presence in the region whatsoever, the French and their Algonquian allies being the dominant force in the area.

The name "Chicago" is the French version of the Miami-Illinois word shikaakwa ("Stinky Onion"), named for the plants common along the Chicago River. It is not related to Chief Chicagou of the Michigamea people.

In 1696, French Jesuits built the Mission of the Guardian Angel to Christianize the local Wea and Miami people. French and allied use of the Chicago portage was mostly abandoned during the 1720s because of continual Native American raids during the Fox Wars.

During the mid-18th century, the Chicago area was inhabited primarily by the Potawatomi, who displaced the Miami, Sauk, and Fox tribes. They had previously controlled the area and moved west under pressure from the Potawatomi and European settlers.

In 1795, following the Northwest Indian War, some Native Americans ceded the area of Chicago to the United States for a military post in the Treaty of Greenville. The US built Fort Dearborn in 1803 on the Chicago River. It was destroyed by British forces during the War of 1812 in the Battle of Fort Dearborn and all the inhabitants were killed or taken prisoner.

The fort had been ordered to evacuate. During the evacuation soldiers and civilians were overtaken near what is today Prairie Avenue. After the end of the war, the Potawatomi ceded the land to the United States in the 1816 Treaty of St. Louis. (Today, this treaty is commemorated in Indian Boundary Park.)

Fort Dearborn was rebuilt in 1818 and used until 1837. During the Black Hawk War of 1832, General Winfield Scott's troops brought cholera with them from the East Coast, where an epidemic raged. It spread among the refugees crowded at the fort, and the soldiers had to dig a pit to bury the dead.

In 1829, the State of Illinois (est. 1818) legislature appointed commissioners to locate a canal and layout the surrounding town. The commissioners employed James Thompson to survey and plat the town of Chicago, which at the time had a population of less than 100.

Historians regard the August 4, 1830 filing of the plat as the official recognition of a municipality known as Chicago.

Yankee entrepreneurs saw the potential of Chicago as a transportation hub in the 1830s, and engaged in land speculation to obtain the choicest lots.

On August 12, 1833, the Town of Chicago was incorporated with a population of 350 On July 12, 1834, the Illinois from Sackets Harbor, New York was the first commercial schooner to enter the harbor, a sign of the Great Lakes trade that would benefit both Chicago and New York state.

Chicago was granted a city charter by the State of Illinois on March 4, 1837; it was part of the larger Cook County. By 1840 the boom town had a population of over 4,000.

After 1830, the rich farmlands of northern Illinois attracted Yankee settlers. Yankee real estate operators created a city overnight in the 1830s. To open the surrounding farmlands to trade, the Cook County commissioners built roads south and west; the latter crossed the "dismal Nine-mile Swamp," the Des Plaines River, and went southwest to Walker's Grove, now the Village of Plainfield.

The roads enabled hundreds of wagons per day of farm produce to arrive, so the entrepreneurs built grain elevators and docks to load ships bound for points east through the Great Lakes. Produce was shipped through the Erie Canal and down the Hudson River to New York City; the growth of the Midwest farms expanded New York City as a port.
Document Source In Part: http://en.wikipedia.org/wiki/History_of_Chicago

About Vu Chicago: Is an publishing platform design to share information for this area of the country. Vu Studios is A Content Production Company That Specializes In:

Ron Abboud is the Executive Producer of Vu Chicago